A couple of gifts for Christmas this year were a hand-held GPS device and a digital map of the South Downs. On Thursday this week, wife, oldest son, youngest son and their wives trusted me to take them on a walk on the edge of the Downs, starting 10 minutes from our home. Starting after lunch on a day overcast with winter cloud we left the car park and the GPS guided us along the planned route–until I missed a left turn. This new toy guided us back to the route after a scrabble through the woods. So far, so good. On the return part of our walk we had to pass through another wood.

After a stiff ascent into it we were faced with a four-way junction and less light, even though most trees were bare of leaves. Not quite trusting this new intrument, we decided on a path that proved to be the wrong one. Unlike at the previous correction, we seemed to go deeper and deeper into the wood and get less and less help from the GPS. Our planned route is the blue line and our actual track is the red one. As light faded totally we headed due south towards the major road we could hear. Then youngest son and I hoofed it along this road back to the car park, leaving the rest of the party to find their way to the nearest hostelry, where we joined them later. Resolved: a) to take a traditional compass on future walks; b) to take a torch; c) to learn how to use aforementioned GPS; d) to avoid woodland paths after dark.

I hadn’t heard of Noida before hearing that I’d be staying there for a week in November. The overnight from London to Delhi was enough to let me sleep most of the way from the airport to Noida’s YMCA, so it was a surprise to wake up on arriving at a new, empty facility–both the city and the Y, as it’s affectionately known.

Greater Noida has a five-year plan to fulfil the dream of a former chief minister of Uttar Pradesh, a woman whose village home was Noida. The greater city rises from a dusty plain of sandy soil, is linked to Delhi by a fine highway, is growing, but has acres of empty plots and dozens of empty high-rise buildings. Crossing the road was hazardous, not for the volume of traffic, but for the locals’ habit of using both sides of the dual carriageway as single carriage roads; there are rules for roundabouts (circles), I expect, but it was hard to predict how any one vehicle would move round the large roundabout that lay between the Y, the pizza house and the Internet cafe. Lorry drivers apart, most did attempt to steer round pedestrians, though some motor cyclists thought it fun to buzz the feckless, just like WWII fighter pilots or modern-day Israeli jets over Beirut. 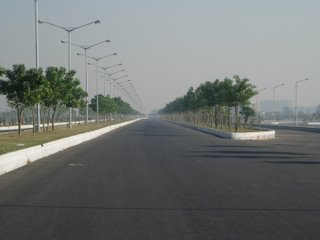 The Internet cafe was three floors up and provided an hour’s access to the world for Rupees15, US$0.30 or £0.17. The pizza house was bright, loud, hot and sold good value, piping hot food. At the end of this stretch of road, to the right, lies a village of labourers; no electricity that we could see, but the road was lit to highest standards with high-pressure sodium lamps. Just before 10 PM, walking back along this road I tried (and failed) to compute and compare the nightly cost of lighting the road with the daily hire of the truck-load of labourers returning to their temporary village. Their main fuel is the hand-crafted, pizza-shaped cowpats neatly laid in lines to dry. The air left one smelling of the smoke; the street lights shone on, oblivious to emptiness or global warming.